Warning: "continue" targeting switch is equivalent to "break". Did you mean to use "continue 2"? in /var/www/web29745956/html/wp-content/plugins/essential-grid/includes/item-skin.class.php on line 1231

Warning: "continue" targeting switch is equivalent to "break". Did you mean to use "continue 2"? in /var/www/web29745956/html/wp-content/plugins/revslider/includes/operations.class.php on line 2734

Warning: "continue" targeting switch is equivalent to "break". Did you mean to use "continue 2"? in /var/www/web29745956/html/wp-content/plugins/revslider/includes/operations.class.php on line 2738

Warning: "continue" targeting switch is equivalent to "break". Did you mean to use "continue 2"? in /var/www/web29745956/html/wp-content/plugins/revslider/includes/output.class.php on line 3679
 Rulebook - ILLCS

International Luta Livre Championships is open to all athletes who practice grappling arts. The ILLCS Rulebook was created to motivate grapplers of all styles to compete in our tournaments, the goal is to create active and attractive fights with only little limitations of the sport.

We fight in a  Round Robin / MULTI-STAGE system:

The First Round of the tournaments is a round robin (pool) system.

After that the elimination rounds beginn.

Above 300 gr. overweight athletes will be disqualified, there won’t be the chance to enter another weightclass, athletes have to be professional concerning their weight. They will get the chance to weigh in again until the end of the official weigh-in-time.

There won’t be any refunds if you miss weight.

No registrations at the event, you have to register online at www.smoothcomp.com

The weightclasses and divisions will be developed with the growth of the event.

Especially Girls, Boys and Women Classes will be focussed on in the future. 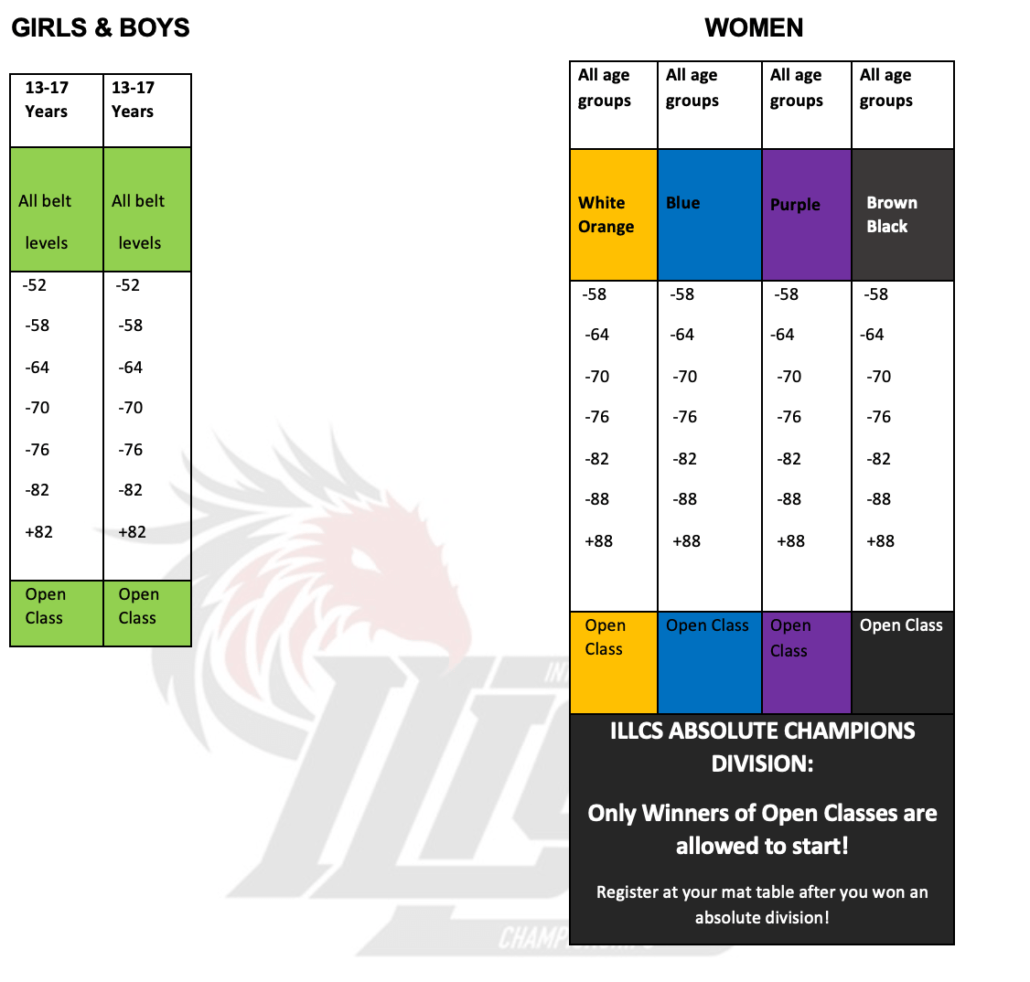 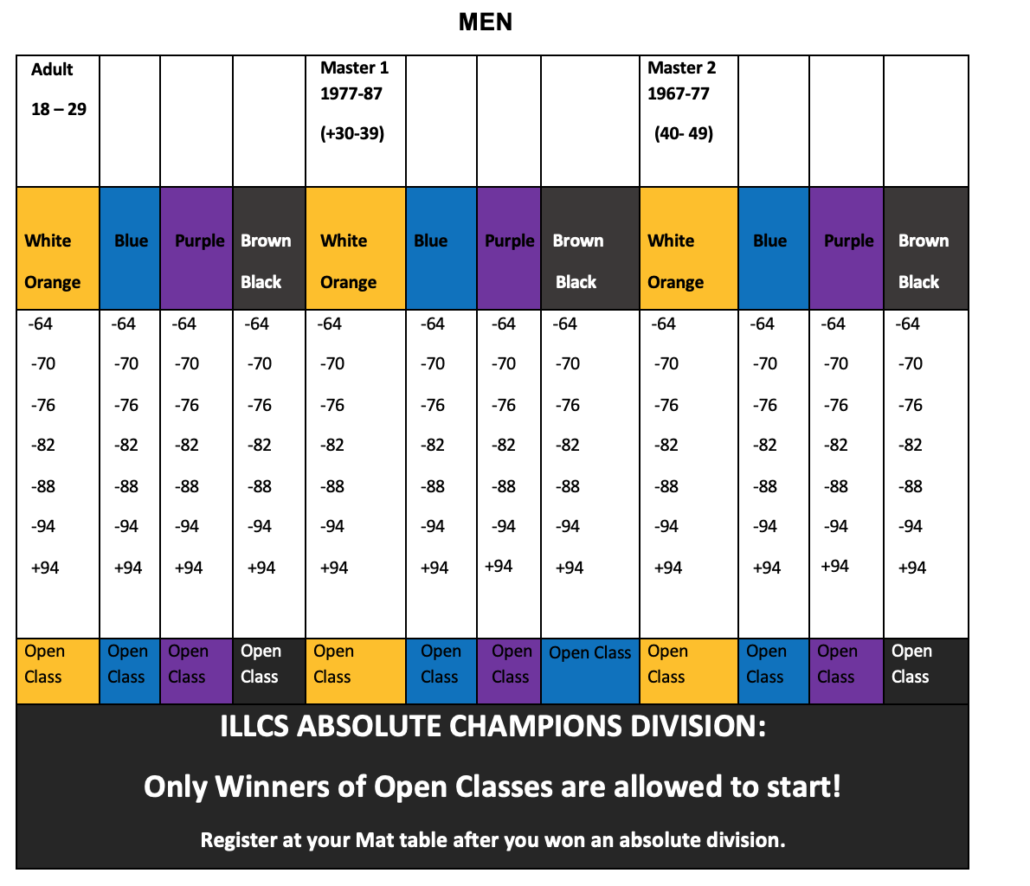 Every athlete will be ranked in his/her division. As we are still developing our ranking it is not limited in seasons yet. So it is the best of all-time ranking so far.

We will develop ranking seasons and an easier system that keeps you up to date, as soon as our tournament has really settled down in Europe and the world.

The Ranking and Pointing System for the athletes positioning in the Best of all time ranking is kept as simple as possible.

Championships are weighed differently, so the points for the rankings are multiplied with the value of the Championships.

An ILLCS match can be won in three ways:

All other matches:    5 Minutes + EBI Overtime

If one competitor is stuck in a submission, the match is not ended when the time is over. Time does not save the competitor! The referee ends the match!!! Not the time keeper! The competitor has to get out of the submission attempt or will lose the match.

Competitors and coaches can be warned, can receive penalties or can be disqualified. This can be a consequence of a violation of rules or unfair, or inappropriate behaviour.

4.1 Reasons for immediate Disqualification are

4.2 Warnings and penalties for minor violations

Major violations like disrespectful behaviour etc. the competitor can be disqualified directly!!! There is no need for three warnings.

If a competitor competes in a skill-bracket lower than he/ she is capable of, it is considered as sandbagging. If this is detected by a referee, it can lead to disqualification.

If a competitor starts in a lower skill-bracket than he/she has to, due to his/her ranking and if this is identified by a staff member, the competitor will be disqualified.